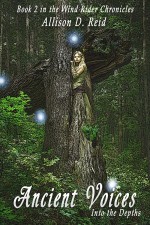 Every Friday on my author Facebook page I will be featuring a sneak peek from one of my books.  Read it on my blog to get a longer version!  This week’s excerpt is from Ancient Voices: Into the Depths, which was released in November.

The melody of the monks’ song was simple, but strong and haunting, with harmonies building slowly, layer upon layer, until they were so tightly woven together that no one voice could be distinguished from the others. They passed beneath Morganne and Elowyn’s window early in the afternoon, and through the open shutters, their strong, clear voices filled the room.

Elowyn thought their song seemed to belong more to the heavenly realm of Aviad than to the earth, its captivating power making her scalp tingle and her arms break out in goose bumps.  Morganne at first sunk to her knees in awed silence, then ran out to follow the procession through the village. Never had Minhaven been so still and quiet. No one dared to break the flow of the monks’ music, which cried out like an anguished prayer from their lips directly to the listening ear of Aviad.

No one worked, including Wyman, who closed the tavern. Fasting was the order of the day. They ate only vegetable broth with salted fish that Idna had made the day before, dry bread, and raw vegetables. People drifted in and out of the chapel, where the monks continued a litany of musical prayers. Their songs, dedicated to Immar, would not cease until the next sunrise. They rotated in and out so seamlessly that there was never a break in the music, not even for a moment. Morganne spent a great many hours huddled in the dank chapel, enrapt and seemingly lost in her own unspoken prayers.

Elowyn stayed for a while, but had difficulty sitting still for very long on the hard wooden seats. She found herself drifting away from the village, seeking out the Ancients in her own solitary way. She walked across the open field behind Morganne’s shop, where she had first met Cailean, and down the well-worn path that led to the sea. Tyroc’s coastline had been flat and sandy, crammed full of docks, boats, and smelly fishmonger’s stalls. Minhaven’s shoreline was very different—rocky and treacherous, with only a few small docks and no harbor. Getting supplies and people back and forth by boat was difficult, even when the weather was calm.

But the sea’s fearsome beauty was captivating. Powerful waves continuously crashed against the rocks, sending plumes of spray far up into the air. When the tide went out, it left shallow pools behind, full of glistening seaweed, twists of driftwood, shells, and sometimes fish. Those who dared to brave the frigid waters would sometimes wade out and catch them with nets. One had to be careful not to get caught too far from shore when the tide returned, for fear of getting stranded and swept out to sea.

Elowyn came here when she most needed time for quiet reflection. The rhythmic pulse of the waves and the lonely calls of the sea birds were mesmerizing. When she allowed her churning thoughts to ebb away with the retreating sea, she usually found treasures in the calm that was left behind; moments of clarity that she gathered as speedily as she could before the dark waters of uncertainty reclaimed them.