I think it’s about time to shake up my Sneak Peek Friday posts a little.  In addition to sharing excerpts from my own writing from time to time, I’ll also be featuring other authors.  Maybe among them you’ll find a new favorite. 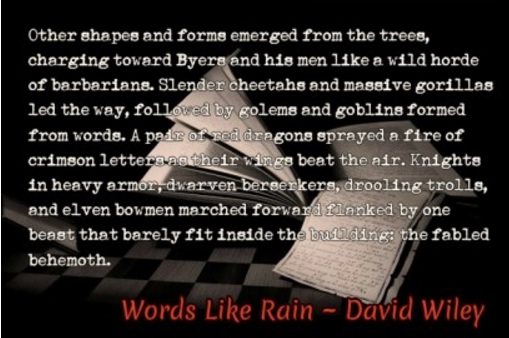 This week I’d like to welcome author David Wiley. Enjoy this exclusive sample from his short story, “Words like Rain,” which was featured in Our Write Side’s literary journal, OWS Ink.  You can subscribe to receive the Spring issue, which includes the entire story along with other great stories, poems, and articles.

The words poured from his mouth like rain. The old man stood in front of the heavy oak doors, arms spread wide to bar their entrance. His deep blue robes marked him as a cleric of the cobalt quill, but they were scorched and covered in soot and ash. Just about everything in this forsaken place was covered in soot and ash by now. The kingdom of Andgiet was being razed beneath the weight of revolution and a new kingdom would rise from the ashes like a phoenix. When the self-titled Lord Emperor van Ludwig had fallen in battle, almost all pockets of resistance within the kingdom had surrendered. Clearly this cleric had not received the memo.

“Please, you must not desecrate this sacred place of learning,” he pleaded. Sweat beaded upon his hairless scalp and trickled around his white eyebrows. His hazel eyes were wide and rimmed with red. His weathered hands whipped forward as he doubled over in a fit of coughing. He regained his composure and stretched his arms back out, gripping the vertical strips of black iron along the edges of the doors, as though he alone could hold them back so long as he stood clutching a part of the door. “Barbarians like you could never comprehend the value of the information contained in these tomes.”

The man standing at the head of the invaders smiled at the deranged old man. Captain Byers was never one to back down from a challenge, much less from an old man, while he had a squad of warriors at his back. Captain Byers found it amusing that he called them barbarians. He was all too aware of the power that words held, especially written words. He had no intention of burning this glorious library to the ground, but the old man would never believe that. Let the rutting fool believe what he wanted about their revolution. Together they would reshape this kingdom and tap into the wasted potential it had squandered for decades. Two of the soldiers moved forward and grabbed the man’s arms, lifting him high off the ground. His feet flailed about in the air like a toddler throwing a tantrum. His crooked back stiffened and his kicking stopped. A milky white flooded his eyes, and the laugh that sprang from his cracked lips caused the men around Captain Byers to take two steps back. But the captain stood firm, his crimson cape billowing in the wind. He pushed the sleeves of his soot-stained doublet up and strode toward the double doors of the building.

The dim light from a thousand candles cast shadows throughout the vast chamber. Columns of books stretched across walls and reached to the ceiling. Captain Byers mused that there were more words contained in this one building than in the rest of the whole world combined. It was a literary treasure trove, but the books were not without company. Men of all ages scurried about and scattered into the shadows. A rainbow of robes disappeared behind shelves and through doors as Captain Byers strode across the black-and-white floor. Tall, mahogany tables stood in the spaces between bookshelves, each one stacked with tomes and scrolls. This was a sacred place to these robed men, a place of learning, and Captain Byers knew it would become the epicenter of power for his new glorious kingdom.

A small, slim figure appeared ten feet away from Captain Byers. His stunted arms and legs were dwarfed by his large head and massive flowing beard. He held his weapon in his arms: a single leather-bound book. The men behind Captain Byers laughed when they realized this dwarf intended to fight without a weapon. But Captain Byers suspected the dwarf had chosen his weapon well.

“Turn back now,” a gravelly voice boomed from the stout man. His eyes flashed red in the candlelight. Captain Byers stood his ground and drew his scimitar from its home. He had to be prepared for anything. The dwarf sighed and opened the book.

Words like rain poured from the yellowed pages, swirling and spiraling as they took shape in the space between them. A knight, three heads taller than Captain Byers, swung an axe through the air as it appeared. Its form was solid yet the flowing letters that shaped the knight were fluid, continually shifting and rearranging in order. The letters ebbed and flowed throughout its massive body like water flowing through a stream. Some of the men behind Captain Byers laughed at the sight. Others drew their weapons. Captain Byers would be certain to remember those men and honor them, whether in memory or in promotion, when the siege of this kingdom was complete. The flowing script turned red, and the knight took a slow step forward. The axe, nearly as large as Captain Byers, whirled in a deadly arc toward the captain.

David Wiley is an author of science fiction and fantasy stories, choosing to write the stories that he would love to read. His short fiction has previously been published in Sci Phi Journal, OWS Ink, Mystic Signals and a King Arthur anthology by Uffda Press. David resides in central Iowa with his wife and their cats and spends his time reading, writing, and playing board games. You can find his blog at http://authordavidwiley.wordpress.com.