“Now in autumn, in which the fruits of the earth are assembled, is the time of reaping and of the vintage, and it signifies the time of the General Judgment, when every single person will receive the reward for his works.” – Hrabanus Maurus (9th Century Theologian)

Summer is nearing its end—can you feel it? For some of us the nights are finally getting cooler, and the birds are just starting to gather and circle in large numbers. With children going back to school, our routines have changed, and we’re already feeling some anticipation about upcoming autumn activities and holidays. 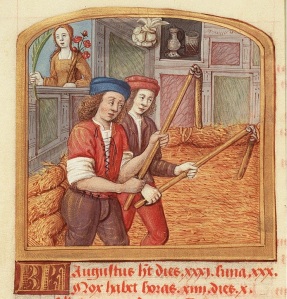 Medieval people had a heightened awareness of seasonal changes. The onset of autumn brought about a final burst of activity as they prepared themselves to endure an inevitable winter. The grain harvest that had begun in summer continued into fall, with threshing and winnowing of what had already been reaped from the fields. At the same time legumes, such as peas and beans, were gathered after they had dried on the plants. Never letting anything go to waste, the leftover leaves and stems could be used to feed the animals, or plowed under as fertilizer. Some fields would be plowed anew with seeds for rye and winter wheat.

Another significant labor for September was harvesting grapes for wine making. Because of the amount of land needed, and the extensive labor involved in both cultivating and working vineyards, they were usually only kept on large estates or monasteries. Wine was incredibly important in medieval society. It was consumed by most classes with meals, but also had medicinal uses, and spiritual significance as part of the Eucharist.

New wine was the most common drink, which had very limited alcohol content. But stronger wines were also produced, and could be watered down if needed. There were many more variations in taste, smell, and color than people are accustomed to today. Wines might be red, gold, pink, green, white, or such a dark red that it had a black appearance. There was also a variety of flavor–some were pleasant and sweet (usually reserved for special occasions), where others might be more bitter, or even vinegary.

Sometimes the type of wine chosen was dependent on the season (and which bodily humors were at play), on age, or on the state of one’s health.  Melancholy was thought to be the dominant humour in autumn, which was “cold and dry.” The Secretum Secretorum advocated specific foods, drink, and activities to combat the negative effects. “Hot moist foods like chicken, lamb and sweet grapes should be eaten and fine old wines drunk, to ward of melancholy…Overmuch exercise and lovemaking are not recommended…but the heat and moisture of warm baths are helpful in keeping melancholy under control.”

Other labors of September included gathering honey and wax from beehives, which would then be moved to suitable locations for winter. Cows would be bred to ensure there would be young calves in the spring. Any cattle, or other livestock, that there were not enough resources to feed through the winter would be sold or butchered for meat. The meat would then be salted, smoked, or otherwise preserved in anticipation of the winter to come. At the end of September, on Michaelmas, lords and other debtors collected their rents and payments.

5 thoughts on “Medieval Monday: The Labors of September”