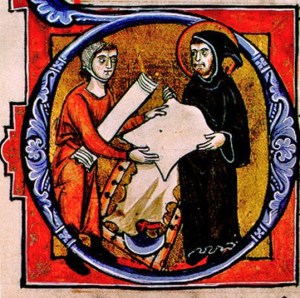 In my last post I talked a little bit about sheep, and how important they were in the medieval world. They could survive on rough terrain and in moderately cold weather, and they provided a variety of important products, such as meat, milk (which could be drunk or made into cheese), parchment, and of course, wool. Even their bones could be used to make tools, like sewing needles, and the ankles were turned into dice for games.

Though wool could be taken from other animals, the primary source was sheep. Not all wool was alike, however. The quality varied among different breeds and even colors, with white sheep producing a finer product that could be more easily dyed to desirable colors. Once a sheep was shorn, its wool was separated out into different grades, each one used for a different purpose. 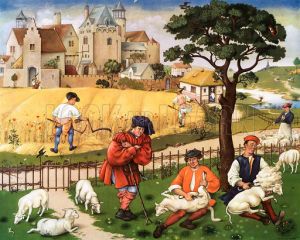 Once the wool had been separated out, it had to be cleaned to remove dirt, foreign materials, and oils from the sheep’s skin. For the coarser wool, soap and water was usually good enough. For the finer fibers, harsher cleaning agents were used, such as lye, or stale urine. Once cleaned and rinsed multiple times, wool was left to dry in the sun, then beaten with sticks to remove tangles, matts, or any other remaining foreign materials the cleansing process had missed.

At this stage, the fibers might be dyed, though the mordant often needed to prevent the color from fading also made the fibers difficult to work with. For this reason, it was more common to wait until later in the process to use dyes. It seems strange that after working so hard to cleanse the fibers from oils, at this stage they would now be added back in. Olive oil or butter might be used as a protectant for the fibers—typically the finer, higher quality ones.

Combing came next. Combs made of either wood or metal were pulled through the fibers to further separate them. Cards were eventually developed, though in some parts of Europe their use was banned. Cards were flat boards with rows of metal hooks. Wool would be transferred back and forth, from one card to another, the result being a finer product. Different wools could also be blended together using this process—a possible reason for the ban. 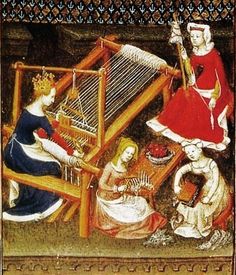 Once the wool had been combed or carded, it could finally be spun into yarn that would be used on a loom to make usable fabric. Wool that had come from the coarse, outer layer of the sheep was longer and thicker. These fibers would be spun into worsted yarn and had a rougher quality, but were very strong. Fibers that had come from the inner layers—once the sheep’s insulation—were curlier and shorter.  They were warmer and softer, but weaker, and were spun into woolen yarns of varying quality. Thicker, heavier yarns were used as the warp threads on a loom, and the lighter, finer yarns were used as the weft threads. Woolen yarn needed additional processing to give it strength and a smoother feel. Worsted and woolen yarns could be woven into anything from a tough, water repellent, working fabric, to an extremely fine, luxurious cloth bested only by silk in quality. Wool had a myriad of uses, from clothing, to carpets, draperies, and furniture coverings, to felted saddle pads, hats, shoes, scabbards, and more.

The following video has additional information about the wool trade and a historic medieval wool house (built in 1338) that still stands in Southampton, England.