One of the tasks medieval people could do any time of the year was dig for clay along river beds, which was used for pottery and tiles among other things. At least in the early medieval period, making pottery was mainly a rural activity. It was easiest to set up a workshop and kiln at or near the source of the materials needed. Large supplies of not just clay, but sand, wood to fuel the kiln, and water were needed. Access to a road or boats for transportation was also required. 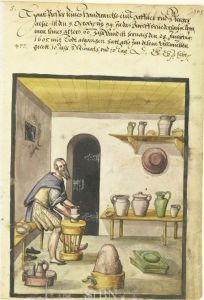 Pottery making was typically handed down as a family industry among the peasantry. Though pottery was valued as a necessity of daily life, pottery makers were one of the lowest regarded craftsmen. It was often a secondary job, done after work in the fields was completed. Tools were simple, including combs, knives, and stamps to add decoration. Wheels were not commonly used until after the 12th century. In the mid and late Middle Ages, pottery making became a larger industry and was also done in towns and cities. Pottery began to include other materials such as wood and metal. Each region’s pottery had its own unique, easily distinguishable characteristics.

I found an in interesting video of medieval-style pottery being made for you to enjoy. He shows a really great piece that was apparently made for washing hands that I’d never heard of.