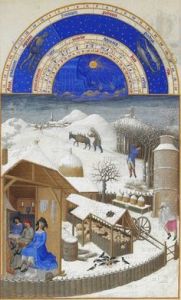 In the cold days of December, the fields were finally quiet, with the ground too frozen to work. Animals were taken care of, to ensure they would not only survive the harsh months to come, but that they would be healthy on spring’s arrival. After all, they would be needed to work. In bad weather, animals would need to be brought indoors and fed straw mixed with other nutrients such as corn stubble, or pea pods.  Other outdoor work consisted of mostly repair and reconstruction. Timber was cut, and fences and walls mended. If autumn rains had eroded the banks of the mill pond, they would need to be fixed as well.

Most work had to be done indoors. Carving wood became a common winter activity–people made useful items like bowls, spoons, and cups. They repaired farming tools and household equipment. Baskets, nets, and harnesses were woven out of rushes or reeds. Women spent a good amount of time spinning thread, weaving, and sewing–making new garments and mending torn ones.

Women would also be carefully managing supplies of food; doing their best to feed hungry families even though the fresh foods gathered or harvested in autumn were now beginning to run out. Most peasant families were surviving on bread and pottage. The kettle was kept going over the fire day after day, the culinary monotony broken up by subtle changes to what was thrown into the pot. Common ingredients would have been beans, leeks, lentils, peas, onions, and herbs like parsley. Meat stock might be used for added nutrition, and possibly salted meat or dried fish on occasion. Eggs, cheese, and butter rounded out the winter diet on days when fasting wasn’t required.

Below I have two videos to share. One is very short and shows how bowls were carved using traditional medieval tools. He makes this look so easy, but I’m sure it takes a lot of practice to learn this skill. The other is December’s Tales from the Green Valley in which the team covers the topics of making preparations for Christmas, building a wood storage hovel, sewing, clothing, threshing peas, making mince pies and other Christmas foods, and decorating for Christmas. Some of the Christmas traditions (like the Yule log) are from a bit beyond the medieval period, but many of the other things they describe would have been the same. Enjoy!

2 thoughts on “Medieval Monday: The Labors of December”