In my last post I talked about peasants in medieval society. This week I am expanding on that, as their roles went far beyond the basic categories of serfs, villeins, and freemen. 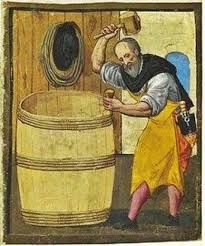 While many peasants provided manual labor in the crop fields, not all of them were farmers. Peasants were craftspeople as well, whether working in a castle or manor directly for the nobility, or serving villages and towns. Peasant trades would have included millers, carpenters, blacksmiths, goldsmiths, shoemakers, cobblers, chandlers (candle makers), coopers (barrel makers), tanners, tinkers, potters, weavers, bakers, fletchers (arrow-makers), book-binders, masons, and many others. Some of these trades were tightly regulated by powerful guilds, particularly in the later Middle Ages.

Work, family, and home were integrated together. Peasants working a craft usually lived and worked in the same building. If they had a shop, it would occupy the first floor where the front of the building might be able to open into a vendor stall. The second floor would be living space for the family. Parents typically taught their children the trades they worked; father to son, mother to daughter. If a child did not learn a parent’s trade, they could be apprenticed to someone else to learn a different one. 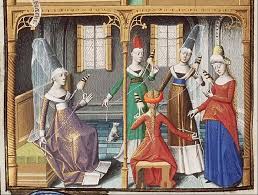 We tend to think that women’s responsibilities were purely domestic, such as tending the home, children, animals, garden, and sometimes helping in the fields during the height of the harvest. However, there were also certain crafts that were commonly done by women, such as baking, brewing, midwifery, and every aspect of textile manufacture. Women were also known to help their husbands with their crafts, including but not limited to leather and metal working, or helping to run mills, taverns, and inns. Positions in convents were typically reserved for noblewomen, but some peasant women were able to enter as “lay sisters.” They would be given the most menial jobs that needed to be taken care of.

Some peasants actually held prominent, even powerful roles that brought them wealth.

A bailiff was hired to help run a lord’s estate. His job would be to delegate jobs to other peasants and hire the appropriate tradesmen as needed for different projects. He was also responsible for taking care of livestock and building maintenance.

A reeve was an assistant to a bailiff; an enforcer who was usually strong and intimidating. His job was to act as a go-between. He made sure that the peasant workers were doing their jobs and not stealing from the lord.

Stewards (or seneschals) were also extremely important, and well paid for their work. They were in charge of managing a lord’s affairs when he was away—taking care of both his property and his finances. A steward by necessity was someone that the lord could trust.

Learn more about daily life in the Middle Ages by browsing previous posts in the Medieval Monday Index.