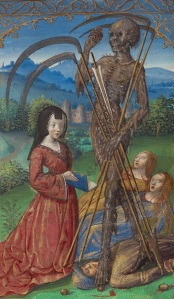 Halloween is coming! Now a fun night for costumes and treats, many say its origins go back to the pagan festival of Samhain, meaning “summer’s end.” It marked the end of the harvest, and the beginning of winter. According to the Celts, this was the time when “the veils between this world and the Otherworld were believed to be at their thinnest: when the spirits of the dead could most readily mingle with the living once again.” They believed that Saman, the Lord of the Dead, would come that night to take up into the afterlife the souls of those who had died that year. Like many pagan traditions, the holiday was eventually Christianized, and remained a time to honor the dead, especially the saints. All-Hallows Eve, All Saints Day, and All Souls Day together were referred to as Hallowmas–a three day event beginning the night of October 31st. 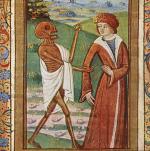 Some of our current Halloween traditions have their roots in the Middle Ages. People would dress in costumes intended to scare away any dark spirits that happened to be wandering about. Bells were rung, and there were processions and bonfires to scare away witches, ghosts, and evil spirits. Children and the poor went door to door, offering prayers for the household’s deceased relatives in exchange for small “soul” cakes.

The video I included today is by Claire Ridgway, founder of TheAnneBoleynFiles and the Tudor Society. She demonstrates how to make “Soul Cakes” using a traditional Tudor recipe (which she reads from so you can hear the original version). If you’re feeling adventurous in the kitchen this week, or want to bring something interesting to that Halloween party you’ve been invited to, give it a shot!

Go to the Medieval Monday Index for more posts on daily life in the Middle Ages.