All Hallows Eve is nearly here! As mentioned in last week’s post, if we were living in the medieval era today, it would be the start of Hallowmas—an important three-day event on the medieval calendar. We might be attempting to mock or scare evil spirits with costumes, lighting bonfires, or souling for the sake of those already departed. We would sincerely believe that by giving bread to the poor, we could redeem a lost soul from the fires of hell. On All Hallows Eve there is a sense that the veil between life and death is at its thinnest, and yet there is nothing to fear from the darkness, because Christ has already claimed victory over death. All Saints Day which follows is where the celebration of Hallowmas really gets serious. It is a time to honor the martyrs and saints of the Church, both known and unknown, many of whom died gruesome deaths for the sake of their faith. 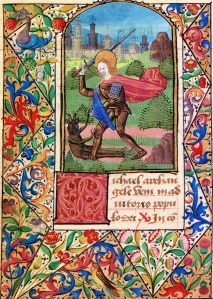 All Saints Day was an occasion for feasting and sometimes great tournaments. It was both a holiday and a holy day, where special ceremonies and masses were held. Prayers to the saints were encouraged in order to help one’s journey through this life and into the next. On the night of All Saints Day, bells were rung. Their melodious tones were thought to bring joy to the poor souls suffering in purgatory—a concept first accepted as a doctrine of the Church in the 1200s that did much to shape medieval beliefs about the afterlife. In purgatory, the souls of “moderately bad sinners” would remain for a time of purification before they would continue heavenward. Purgatory would not permanently close until the very end of time, when “angels would rouse the dead from their graves to be judged by God,” and the souls within it would finally gain admittance to heaven, or be sent to hell, for all eternity. 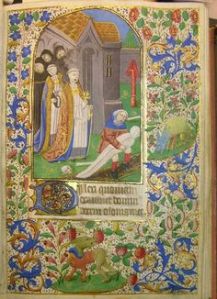 From All Saints Day, the transition was made to All Souls Day on November 2nd. Again, there was feasting, but the focus shifted from the martyrs and saints to ALL of the faithful departed. Death was a very central theme of medieval life, which was always full of uncertainty. The child mortality rate is estimated to have been somewhere between 30-50%. Conditions were highly unsanitary as there was no understanding of germs, nor of their direct connection to disease. As such, medicines were largely ineffective, and most injuries and diseases could not be properly treated. Any minor ailment (by our standards) could end in death. The additional risks of famine and war were all too real, and public punishments were often physically brutal. It is no wonder that the medieval mind was so fixated on what would happen beyond death, and beliefs on the subject shaped the attitudes and culture of everyday life.

On All Souls Day, prayers were specifically directed toward helping those deceased who had not yet moved from purgatory to heaven. Medieval Christians were taught that the fate of a person’s soul was not only related to the manner in which they lived, but also the manner in which they died. Most hoped to die in bed, with a priest at hand to administer the Last Rites—the final forgiveness of their sins. A sudden, or “bad” death, was something to fear, since dying with unconfessed sin would likely lead to a long stay in purgatory, or worse.

All Souls Day provided reassurance for those too poor to pay indulgences, either for themselves, or on behalf of their deceased loved ones. It was common for people to visit the graves of their relatives and friends, and later on in the Middle Ages, candles or even bonfires might also be lit there. In Eastern Europe, it was not unusual for people to eat meals at the grave sites as well, though this was frowned upon by the Church. Men dressed in black would walk through the village or city streets, ringing hand bells, and reminding people to help those in purgatory with their prayers.

One thought on “Medieval Monday: Hallowmas–Saints and Sinners”