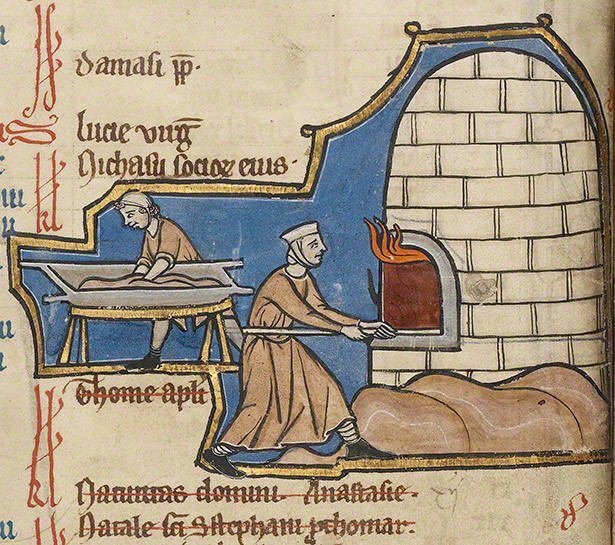 An illuminated manuscript in the Getty’s collection features this illustration of bread baking from the 13th century. For the food historian, it presents a number of quandaries.

One figure works the dough with his bare arms in a large trough set on a trestle table, which is clear enough. The other maneuvers a long-handled peel, presumably setting the bread into the oven or removing it.

The illuminator had no doubt seen this procedure, but the details are somewhat confusing. On the floor beneath the oven there appears to be a flowing mound of dough of the same type as in the trough, though no one in their right mind would put dough on the ground. It must be a figurative depiction of the rocks or dirt beneath the oven.

More perplexing is the shape of the oven, which is extremely tall and narrow—a shape completely inefficient for baking bread, since the heat would rise to the top and the surface of the oven floor would be relatively cool. It would be too small to hold more than a few loaves. Bread ovens are generally more wide at the base than tall, more spherical and domelike.

An oven aperture is normally two-thirds the height of the entire oven. This allows for the maximum flow of heat, aiding heat retention. This oven door does seem about two-thirds the height, but again, the oven is much too tall to work properly. Moreover, the flames licking out at the top of the door reflect an early stage of heating, but not the point when the bread would be baking inside. Normally after the hot coals have heated the oven for a few hours, they are raked out and baking begins.

A pizza oven, with which you might be familiar, is a little different as a fire is often kept

burning at the rear of the oven to keep the temperature up and pizza bakes very quickly, unlike the slower heat of a bread oven. It is of course possible that it is an early kind of pizza or focaccia being baked—without tomatoes, of course, since those didn’t enter European cooking for centuries—but there’s nothing indicating that specifically here.

In all likelihood, the artist took some aesthetic liberties with the shape of the oven for dramatic effect or maybe just to fit the illustration neatly into the space on the page. In any case, reconstructing this procedure is largely a matter of guesswork. The earliest recipes for bread appear a few centuries after this illustration was drawn. In England we don’t get a decent description until Gervase Markham’s writings in the 17th century.

For more insight into how bread was made in the middle ages check out this Medieval Monday Post that I researched and wrote on the topic. Click Here.