This place has seen better days. There is part of a tower or castle looming in the background, but everything around it seems to be falling apart, including this entrance with gaping holes in the roof. It isn’t abandoned though–there is a guard on watch. Is that a gallows behind him on the other side of the wall? It adds to the sense of foreboding in this picture, along with the fog, the dead trees, and the crumbling structures.

Who lives in that castle? Is it a tyrant living lavishly on the backs of his or her subjects, while dishing out cruel punishments for any minor infraction? Or is this city part of of a kingdom that has fallen on hard times and is barely surviving? Maybe there’s a completely different twist to this story that only you can tell…

The existence of this pool seems nothing short of miraculous. Aside from rain, what could be feeding it so high up on that tower of rock? I imagine this would be a place of pilgrimage, where the waters of this hard-to-reach place are surrounded by speculation and myth. Perhaps they heal, or impart hidden knowledge. They could be transformative, changing one substance, or being, into another. Could it be that in the pool’s reflective surface you can see things beyond normal human sight? Or the water might serve as a hidden gateway from one realm to another. Maybe it’s not really water at all. There are so many possibilities, limited only by the bounds of your imagination…

It has been a long, exhausting day of walking through harsh mountain terrain. You’re cold, hungry, your muscles are aching, and the sun is about to set. Suddenly you come upon this place, nestled onto the top of a nearby peak. The windows are lit up with a friendly glow, and there is smoke rising from the chimney. The musk of burning wood that carries on the wind makes you long for warm, dry clothes, and a hot meal. But this is a strange place to live, remote and barren, with no good place to grow food, keep livestock, or even hunt for game. Who lives there, and how do they survive in this harsh climate?

This image made me think of my short story about Delevan, a young man whose village was destroyed by wyverns during the Era of Desolation in my world’s extensive history. Salvaged from the wreckage was an important tome, and Delevan was entrusted to deliver it to a monastery in the mountains for safekeeping. The journey was not a simple one, and he met an unexpected foe on the way… But that is only one possible story. What’s yours?

There’s got to be a good story behind this striking image. What is that horrible creature lurking below the water’s surface? Its tentacles wrap around the doomed ship, but also seem to be holding up the chest filled with gold. Did those on board try to appease it with wealth, only to anger it instead?

The second boat is trying to make a hard turn away from the creature. With prayer and luck it just might get away, or else it will share the same fate as its sister ship. Should any of these sailors survive, their tales will no doubt spark legends, many of which will grow over time to have a life of their own. It’s no wonder sailors are such a superstitious lot!

What does such a creature want with gold anyway? Does it collect wrecks as a dragon hoards treasure, or is there perhaps someone waiting on the ocean floor to receive it? Someone who is using the beast to hunt, much like hawks can be trained and released to bring back game.

But these are only some of the possibilities. What do you see? 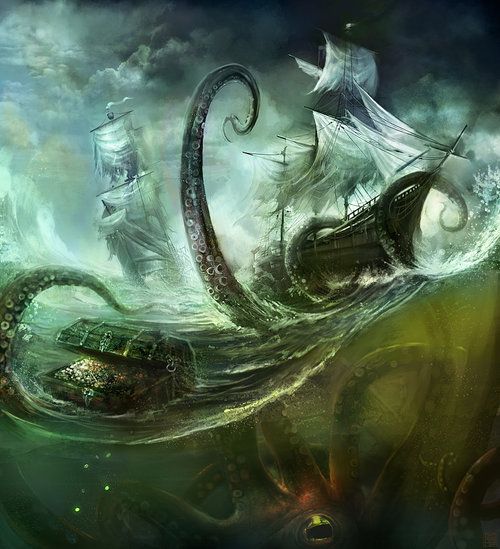 Here’s a sight to stop your heart…a dragon’s head in the morning mist, rising above the tree tops. The swordsman looking up at it seems so tiny by comparison–this monster could easily eat him whole and use his sword as a toothpick afterwards. The headstone on the ground is not an especially good omen either. But heroes are made, not born, and legends are full of defeated dragons, so perhaps this brave warrior has some tricks up his sleeve.

Has he happened upon this dragon by chance? Or has he come prepared for the challenge? It’s up to you to decide his fate…

“Dragon in the Woods” by Simon Fetscher

Beautiful, yet forlorn, this place is slowly succumbing to the ravages of time. The lonely figure walking this crumbling corridor is determined to remain its companion to the very end. It was a glorious place once, built by a wealth and power that has long ebbed away. But when this structure was new, and whole, it gave the lives of those within it meaning and purpose. This robed figure has not forgotten, even though its noble arches are now draped in vine, and the crows brazenly come and go as they please. There is writing etched deep into the stones beneath the pillars. Each word is a plea from the past; a silent but unyielding voice that demands a place in the present. The robed figure knows what they say. Do you?

No one had been here for hundreds of years. The narrow mountain road that had once wound its way up to the top of the peak now had wide and unstable gaps. He had taken the path as far as he could, but to get to the entrance of the ancient castle, the only way up was a grueling climb. The doorway he was trying to reach was still some distance upward, and he’d barely made it to the ledge he was on. His muscles were weak, and he was cold and incredibly hungry. The final leg of his climb would have to wait for morning.

He had no idea what would be waiting for him inside the structure once he got to it. The people who had once lived here were mysterious and reclusive. Rumors swirled about the strange powers and abilities they were said to have possessed. The greatest mystery was what had become of them. What would he find once he made his way inside? And could he manage to get the answers he sought without sharing their fate? 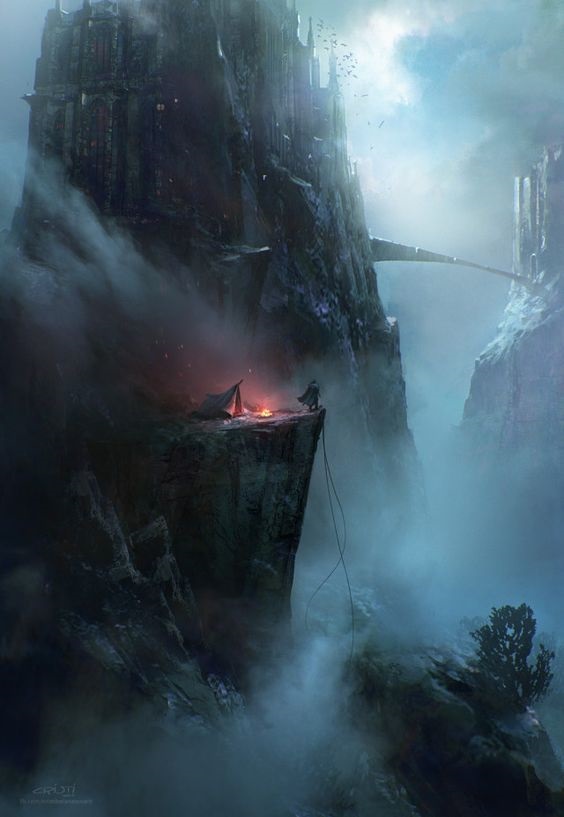