Fire was crucial to survival in the Middle Ages. With electricity and gas-powered devices still far into the future, open flame was the most common source of heat for cooking, industry, and protection against the cold. Fires were a bit more difficult to set in an era before matches, particularly if everything was wet. Fire-steels, flint, or pyrite (struck against iron to produce a spark) might be carried in a leather pouch along with tinder. Tinder could be dried brush, straw, birch bark, rotten wood, pine needles, wood shavings, small twigs, or char-cloth. Char-cloth was made by briefly catching a bit of clean linen on fire, then putting the fire out. The resulting bit of blackened fiber could be saved for later and easily caught fire. Once a fire had been successfully lit, the resulting coals were protected with fire covers or other means. It was more convenient to revive a fire from still-hot coals than to start one from scratch. 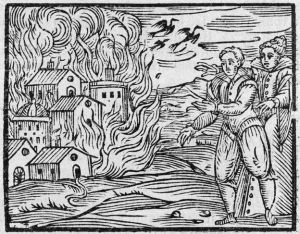 As much as fire was a necessity to life, it was also a significant hazard in the medieval world. Stone and brick were prohibitively expensive building materials for the average person. Most buildings were made of wattle and daub with thatch roofs, and straw beds were often pulled close to hearth fires—all of these materials burned quickly once lit. In cities, the buildings were also built very close together, so if one building went up in flames, those near it would likely burn down as well. Many towns throughout Europe were at one point or other devastated by fire, whether by lit by accident, invaders, or even lightning. After 1213, London forbade thatch roofing in favor of shingles and tile, though other towns were slow to do the same.

Cook houses and kitchens were sometimes built separate from other structures because they were such a common fire hazard. Brewers and barbers were tightly regulated for the same reason. They were all required to have their buildings whitewashed and plastered, both inside and out. Fires posed not only a threat to people and livestock, but to the longevity of the community if large food stores and other structures or supplies vital to survival were destroyed.

Imagine trying to fight a large fire with no hydrants, hoses, firetrucks, extinguishers, or any other modern equipment. In some cities access to water was already at a premium, and even with a large water source close by, there was no fast delivery system. Firefighting equipment of the day was buckets of water, firehooks to pull down thatch and compromised buildings, and lots of manpower. Each home was required to have a full container of water ready and waiting outside the front door, and every citizen was obligated to assist when a fire broke out.

While stone buildings were safer, they were not impervious to fire, and even castles could be destroyed by it. Starting fires was often a tactic used by those laying siege to a castle or keep. Catapults could fling flaming objects over the stone walls in the hopes of catching something flammable on the other side. Once started, such fires were very difficult if not impossible to extinguish.

On a personal note, I once visited a still-habited castle in Germany (sadly, I cannot remember its name) which burned in modern times much as structures would have burned in the medieval era. A fire was started on a cold winter night when embers from an untended fireplace lit a rug on fire. There were no hydrants or sprinkler systems—the firemen had to draw water from the river below the castle. But it was so uncharacteristically cold that the water was freezing in the hoses on the way up. Like ancient times, citizens were called upon to try to save the castle by bucket-brigade.

I remember seeing aerial photographs immortalized on informational plaques at the site, showing the sections that had burned. The original walls remained standing upright, but everything inside of them was gone, right down to the bare earth below. The owners had spent many years after (along with a small fortune) restoring the castle, though countless irreplaceable pieces of history had been lost forever.

It has been close to 30 years since I visited that place on a leisurely afternoon, and enjoyed piece of Black Forest cake in the café just below it. But it obviously made a strong impression on me, as sights and tales of fires would have made an even stronger impression on those so vulnerable to them in the medieval era. Such events were in fact one of the ways medieval people marked the passage of time before watches and calendars were commonplace items. Everyone would remember the year the river flooded, or lightning hit the church steeple…or the local castle burned to the ground on a frigid, winter night.

Want to know more about the Middle Ages? Check out the Medieval Monday Index for additional topics.

For this week’s Medieval Monday post, I thought I might share the information I’m currently researching for my work in progress. We are pretty familiar with castles through pictures, movies, and if we’ve been lucky, tours of the real thing. We also know something about ordinary living structures that peasants lived in (see related post). But there is another class of structure that is somewhat more elusive, and I’ve been doing some digging to find good information on it. I’m talking about the towerhouse.

Some classify these as castles, but they didn’t have all of the components of castles or keeps, nor were they ordinary houses. Still standing examples of them are rare, and any supporting structures that once existed around them even more so. Towerhouses were built by wealthy lords to be fortified homes. They were meant to protect the lord, his family, servants, guests, and valuables–mainly from would-be marauders rather than from organized armies. Such homes were typically constructed in remote areas that were difficult to get to and had some strategic importance. Sometimes towerhouses were built in isolation, but they might also have a town constructed around them, or they were expanded upon over time to become part of a larger castle. They became increasingly popular toward the end of the medieval period, but for my own research I’ve been most interested in the earliest examples.

While no two towerhouses were precisely alike, their 3-4 story design and layout followed a distinct pattern. On the outside they were plain and rectangular with very thick walls, occasionally towers were built into the four corners for added space. There was no forebuilding or outer defensive wall, and the ground floor didn’t have windows. The ground floor was primarily for storage, perhaps even keeping some animals, and often had its own separate entrance.

The first floor was common living space with a hall and a fireplace built into the wall. Service rooms might be on this floor as well. Winding staircases would have been built into the inside of the outer walls, connecting the first floor to the upper stories in a way that made entry difficult for anyone who might breech the entrance. The second floor had private space—perhaps another hall, and sleeping chambers. If there was a third (or even fourth) floor, it would have contained another hall and space to house a garrison in times of siege. For security reasons, only the very top floor or floors would have had windows to let in light. There would have also been battlements around the top where guards could watch for intruders and rain down arrows, stones, hot oil, or other projectiles as necessary to protect the home.

Some towerhouses had kitchens on the main floor, but kitchens were a constant fire hazard so often they were in a separate building. Though it would seem towerhouses were completely self-contained, there were by necessity additional structures to support it, such as stables, buildings related to farm work, or even additional living quarters since space inside the towerhouse was at a premium. Guests staying in the main house might have to share sleeping chambers, or even beds, but it provided security that the outer buildings could not. Furniture seems to have been kept to a minimum, and interiors differed in decor–some were more lavishly decorated than others.

As I continue to research these unique homes and learn about what daily life was like inside of them, I will update this post or even make a new one if I find enough to make one. I did find a video tour of an Irish towerhouse for your enjoyment. Some components of the layout are different than what my research indicated was typical, but then again, no to towerhouses were the same, so some variation is expected, especially between regions.

Use the Medieval Monday Index to discover more topics relating to daily life in the Middle Ages.

Get inspired with this week’s Fantasy Art Wednesday, where fun fantasy artwork is combined with a writing prompt to get your creative juices flowing!

There’s something ominous about this castle, which seems to have been built inside of a ravine, or even perhaps a great hollowed out mountain. The air is freezing cold; icicles hang from the castle’s spires like giant daggers. Why are so many birds circling? Are they seeking prey…or perhaps carrion?  They could be spies, watching for any who might trespass here, and crying out warning to whomever is lord or lady of the castle. Into the sides of the surrounding cliffs, I swear I see faces looking out. Gleaming skulls, silently warning me to stay away. Unless I have already come too far, and there is no longer any way back. Turn now, and flee while you can…or find the entrance and take your chances. What adventure awaits? Only you can know… 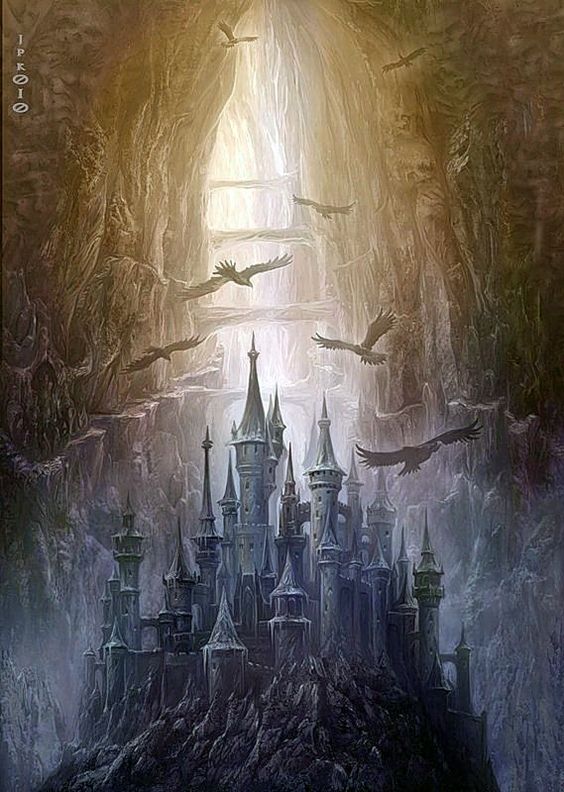 Welcome to another Fantasy Art Wednesday!

This week I’m sharing an image of Alan Lee’s work. He’s hands down my favorite fantasy artist. I have fond memory of sitting with his Castles book as a teen, just mesmerized by his drawings and watercolors. Not only that, I loved the themes of his work and the stories that went with it, which were mostly classical mythology, legends, and literature: the world of King Arthur, Charlemagne, Norse mythology, Celtic legend, and fairy tales. If you’re familiar with this book, or Alan Lee’s work, you might already know the story behind today’s image. But whether you do or not, it still makes for an intriguing writing prompt.

There is something odd about the ship, with its sails in rags and no visible crew, save the lone man struggling to climb away from it on the rocky shore. He’s soaked through, perhaps weak and tired. But there is certainly determination in his movements…maybe desperation too. This whole image smells of “quest” does it not? What is this place he’s come to? Its staircase and open entrance beckon, but what is waiting for him on the inside?