An archaeological dig in Milan has uncovered the remains of a young man who suffered massive injuries, likely caused by torture and execution while being ‘broken on wheel’.

The team of researchers from Università degli Studi di Milano were examining the remains of 56 individuals that were discovered buried at San Ambrogio square in the Italian city of Milan. These skeletons date from between the era of the Roman Empire to the sixteenth-century, but their focus was on individual found with two buckles. Radiochemical tests were performed, which dates the body to between the years 1290 and 1430. He was between 17 and 20 years old when he died.

The individual was found with numerous wounds, which the researchers noticed as having a very specific distribution. All the long bones on his forearms and legs were fractured in a way that the weapon hit the bones perpendicularly. He also had blunt force injuries to his face, a stab wound that hit his vertebrae, and a deep fracture at the back of his skull, which the researchers believe was caused during a clumsy attempt to decapitate him.

Monastic communities and illuminated manuscripts play important roles in my book series, so articles like this one always intrigue me. They give me glimpses into a reality that has long inspired my imagination and continues to fuel it. I can’t help but think, this woman could have been a real life version of my character Morganne, who loves and studies the ancient spiritual tomes of her world. The thought makes me want to read more history, look deeper…discover what life would have been like for someone like this woman who lived 900 years ago. I hope you are intrigued by this article too. Don’t hesitate to browse the Medieval Monday Index for more information about the real Middle Ages.

A team of researchers examining the remains of a woman buried around the year 1100 AD have – to their surprise – discovered dozens of tiny bits of blue stone in her teeth. They soon realized that she was likely a painter of illuminated medieval manuscripts.

The discovery was made by an international team of researchers, including those from the University of York and the Max Planck Institute for the Science of Human History. They had been examining the remains of individuals who were buried in a medieval cemetery associated with a women’s monastery at the site of Dalheim in Germany. Few records remain of the monastery and its exact founding date is not known, although a women’s community may have formed there as early as the 10th century AD. The earliest known written records from the monastery date to 1244. The monastery is believed to have been home to about 14 religious women from its founding until its destruction by fire following a series of 14th century battles…

Today many people are concerned that their job or profession will become obsolete due to changing technology. In you go back to the Middle Ages you can find several occupations – some that involved a great deal of learning, and others that were a choice only for the desperate – that have disappeared. Many of these were also made redundant by technology. Here are ten of these jobs. 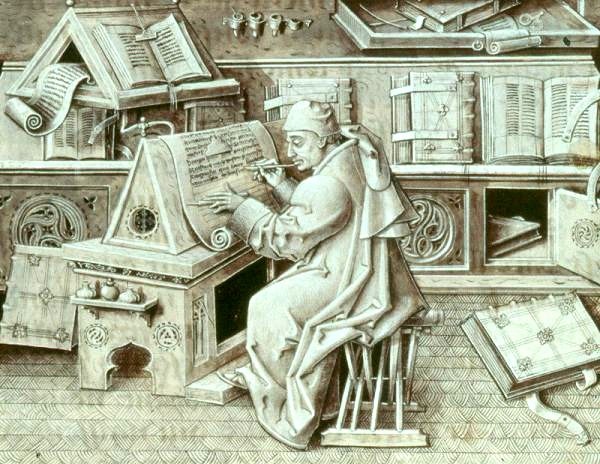 One of the main ‘scientific’ beliefs throughout the medieval world was that it was possible to change chemicals and metals. Scholars experimented with various processes and techniques to purify metals and convert them into new forms. One particular goal of medieval alchemists was to turn lead into gold or silver, but for others the objective was to create medicines to heal or sustain the human body.

Some of the leading scholars of the Middle Ages dabbled in alchemy, including Albertus Magnus and Roger Bacon, but by the 17th century the ideas behind alchemy were gradually dismissed, and the science of chemistry replaced it.

In medieval England, the profession of brewing was often dominated by women. In towns and villages women could be found running side-businesses in brewing and selling ale. As Judith M. Bennett explains, brewing was “a small-scale, low-investment, low-profit, low-skilled industry – suited especially well the economic needs of married women. Because ale soured quickly and transported poorly, it was unsuitable for large-scale, centralized businesses. As a result, wives who sought to sell ale on a modest and ad hoc basis could compete effectively in the trade.”

By the 15th century this practice began to fade, as brewing became more commercialized and society sought to restrict the independence of women.

An important position in many royal courts was to be the person that served the monarch their drinks. It was widely feared that one could easily be poisoned, so this person was responsible for making sure the drinks were safe, even if that meant tasting the beverages themselves. A king needed to be very trusting of his Cup Bearer, so the person with this job could be very influential in court politics.

Learn more about the daily life in Middle Ages by browsing previous posts in the Medieval Monday Index.