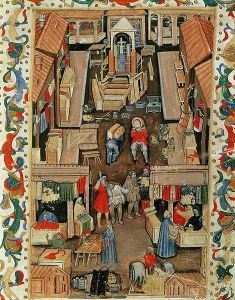 It’s hard to imagine a world where paper money and coinage isn’t the most common way to pay for things. But that was the reality for most people in the Middle Ages.  The majority of your daily needs would have been met using either your own skills and labor, or acquired through the barter system. It wasn’t even gold and coinage that made the nobility wealthy, but the amount of land they held. Land that produced important resources, including crops, timber, quarries, mines, livestock, or game for hunting. It might also include vital waterways, towns, or cities.

In the feudal system that governed medieval life, the poorest classes were basically bought and sold with the land they lived and worked on—their labor was part of what made the land profitable. Everything on, or within, a noble’s lands could be taxed. For the most part, taxes weren’t paid in currency either, but in goods and services. Kings and queens bestowed land upon their lords, and the lords in turn owed back a portion of the wealth they collected, along with the promise to provide trained knights and soldiers as needed. 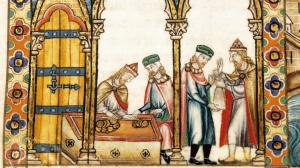 All that taken into account, currency wasn’t a complete unknown either. Sometimes the barter system was simply too impractical or difficult, and didn’t always work well for merchants who were trying to buy goods from distant places. Kings paid their armies with coinage and used it to buy imported goods. When a king traveled to other kingdoms, he would take money that would be of value in the place where he was going so that he could buy goods and services while he was there. There was an additional need for coinage, and that was the Church, which also collected taxes. The practice of indulgences (something later challenged by the Reformation movement) meant that people could purchase forgiveness of their sins with money. Typically coinage was only useful in the city, or at large trade fairs—it would not have been commonly carried around otherwise. 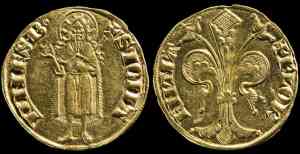 The Florin–one of the few standard currencies in Europe by 1300.

So what did medieval money look like? In Europe there wasn’t a single standard. Coins came in different qualities, weights, and shapes. For the most part they were lightweight, and the edges weren’t rounded. Gold, silver, and copper were the standard metals used for coin 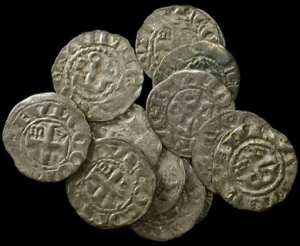 production, with gold having the highest value. At first the small silver penny (pfennig or denarius) was the most common. In the 13th century, the groat was introduced. This was a larger silver penny (worth 4 of the smaller ones). Eventually silver was phased out in favor of copper, which was cheaper to use. Medieval coins had a variety of designs stamped on them depending on where they came from. Under feudalism, each region produced its own to honor whichever authority it happened to be under. With time, these designs became more standardized to make trade easier from region to region.

This very short video honors William the Conquerer by making a reproduction of his coin. It demonstrates how coins were made then, and continued to be made, through the Middle Ages.