Horses were extremely important to medieval society. Generally they were smaller than modern day horses, and were of different builds and kinds—some no longer in existence today. The concept of “breed” had not yet come about, but horses were classified by “type” depending on what sort of work they would be used for. The three main types were chargers, palfreys, and sumpters, with specific sub-classifications under each.

Sumpters were used in the fields to pull plows for planting, gradually replacing oxen as the animal of choice. They were powerful draft horses, not particularly beautiful, but the least expensive. Still more costly to keep than oxen or donkeys, they gained favor because they could work longer and faster. When they weren’t being used for field labor, they could be put to use pulling carts and wagons, or hired out to those who needed the use of a horse but didn’t own one.

Palfreys were ideal for riding, particularly over long distances. They had a particular gait (the amble) which was comfortable and fast. It could be maintained for long periods of time, making travel easier for both the horse and rider. Some palfreys were in such demand, only the wealthy could afford them.

Chargers were, of course, those horses trained for tournaments and warfare. However, knights rarely rode their war horses. On the way to battle, these horses would be led by the knight’s squire, while the knight rode a less valuable horse. This would help save the charger’s strength for the coming fight. Some chargers were less valuable than others—depending on the type, they might also be used for more everyday uses, such as general riding, hunting, or even to carry packs, though they were never used to pull carts.

When they were not working, horses were generally kept in stables with stalls large enough for the animal to lie down. Peasant families might keep work horses in barns along with their other animals, or pasture them in a fallow field, providing a simple wooden shelter the horse could use in bad weather. As much as possible, horses were left to graze on fresh grasses. When those were not available, they were fed primarily oats and hay, sometimes beans and bran. There was also something called “horse bread” which was a baked mixture of peas and beans. How much a horse was fed depended largely on how hard it was being asked to work on a daily basis. 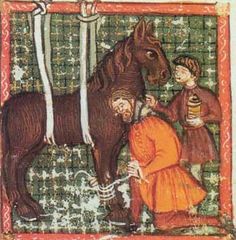 Horses typically wore iron shoes, often with raised areas on the heel portion to improve traction on slick and muddy surfaces. This type of shoe is not one still used today. Farriers—those who shoed horses as their trade—were also responsible for the care of sick horses.

Horses were regularly groomed with combs and brushes, bathed by hand, and wiped down and dried with a rough type of cloth that made their coats shiny. No doubt the horses of the nobility received a better grooming regimen than the workhorses plowing fields. Though horses were the primary source of medieval transportation, only wealthy households could afford to keep a stable full of horses. Most only kept the number of horses they could afford to care for year ‘round, and had a practical need for on a daily basis.