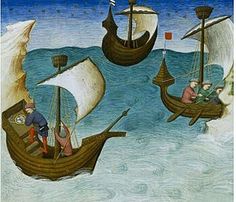 While many crops and other goods were able to be moved by hand, or by using animal-drawn carts, boats were also an important mode of transportation in the Middle Ages. They could bear larger and heavier loads, and allowed merchants to trade over long distances. They brought goods into the medieval world from exotic places, sparking a desire for shorter, less difficult passages, which eventually led to world exploration. There were a variety of ships built and used in the Middle Ages, and there isn’t enough space in this post to explore them all. For today, I’m going to focus on those used by merchants, since they had the most impact on daily life.

For Northern Europe, the Cog was a standard merchant ship—though more accurately, it was a general term used for a variety of ships that had similar attributes. Cogs were built small at first, but with need and advances in ship building techniques, its size grew over time. The cog’s hull had high sides, and its bow and stern castles were all fortified. Though it did have oars for rowing, a single square sail was its primary means of propulsion. Cogs were difficult to sail as they were slow and not especially maneuverable. But their most distinguishing, and useful feature, were their wide, flat bottoms, which made them spacious vessels that could hold bulky loads. These ships could carry 200 tons of cargo, which was about ten times the amount that a Viking ship could hold. Cogs were able to travel along rivers, through the tidal coasts of Northern Europe, and in the shallow waters around the Low Countries. Built to be sturdy, they could be beached, and even run aground, without sinking.

One odd feature about the cog was that the horizontal deck planks were intentionally built with gaps between them, which allowed water to drain from the deck into the cargo hold below. There the water was pumped out with simple bilge pumps. This required some innovation when it came to packing and storing the cargo so that it wouldn’t get wet and be ruined before arriving at its destination. Therefore, most cargo was enclosed in very large (252 gallon) barrels, called “tuns” (from where we get the term tonnage).

It took some time before the cog style ship came into use in Southern Europe, where maneuverability was considered more important than having a reinforced hull. There Roman style galley ships continued to be used until later on in the Middle Ages.

I’ve included two short videos today. One is a fascinating look at an actual medieval vessel that was found and is in the process of being restored, and the other shows some of the tools and methods used to build medieval ships.