Make we merry both rich and poor,
For now is the time of Christmas!

Let no man come into this hall,
Groom, page, nor yet marshal,
But that some sport he bring withal!
For now is the time of Christmas!

If that he say he cannot sing,
Some other sport then let him bring!
That it may please at this feasting
For now is the time of Christmas!

If he say, he can nought do,
Then for my love ask him no mo!
But to the stocks then let him go!
For now is the time of Christmas!
(from a 15th century carol) 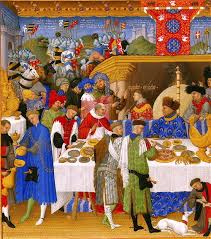 Christmas day is here! Giving gifts is a big part of our present day holiday tradition, but not so in the medieval world. Gifts weren’t given until New Year, which was a continuation of Roman tradition. Instead, Christmas was a time for charity and feasting. Boar was a central part of the feast for those who could afford it, and the head was brought in with great ceremony, usually accompanied by a celebratory song or poem. For those who could not afford to have one, a pie shaped like a boar would do nicely. In wealthier households, venison, game birds, and beef would also be on the menu. A typical Christmas meal might also include bread, cheese, mutton, pork, mince pies, apples, nuts, puddings, fish, stews, soups, sauces, ale, and wine. Food was seasoned with spices like ginger, cloves, saffron, and pepper.

Christmas feasts alleviated the suffering of the poor, for whom winter was the most difficult time; the fields were empty and demands on labor were considerably smaller. Reserves were shrinking as belts tightened by necessity. Rich and poor celebrated Christmas together, with the rich encouraged to open their homes to the needy in honor of the Christ child, and the poor asked to contribute some small thing, such as a loaf of bread, or fuel for the fire. At Glastonbury abbey manor, each peasant was entitled to the following at Christmas dinner:

“He ought to have his dinner at Christmas in the Lord’s court; himself and his wife, that is two white loaves of bread and two dishes of meat and sufficient ale, clearly and honourably. And he ought to bring with him a dish and a cup and a table cloth. And he ought to bring before Christmas one bundle of firewood to cook his dish. And if he does not do this he shall have his victual uncooked.”

In 1314 it was recorded that “some tenants at North Curry in Somerset received loaves of bread, beef and bacon with mustard, chicken soup, cheese and as much beer as they could drink for the day.” Charity was not just encouraged, but in some cases was required in exchange for certain legal rights or favors.

Entertainment was part of the Christmas feast, too. Musicians played and sung, and actors performed. Table games, most notably chess or backgammon, and cards were popular, as were masked social games—even though they were sometimes lewd. The celebration wasn’t over the night of December 25th—Christmas continued on through January 6th, the Feast of Epiphany.