A wolf sits in wait by the grave of his master; a warrior in life, a hero in death. All around the stone are the swords his comrades set in place to honor him, and to pledge their continued loyalty. Each man is ready to take their sword back up and swear their fealty anew when they meet again in the next life. Yet as the days and weeks pass, each one of them eventually departs. There are more battles to fight, and life must continue. Not for the wolf.

Many out of concern tried to lure him into the living world with them, offering food, and affection. But a wolf only has one master, and his told him to never leave his side. And so the wolf waits. Death is meaningless. He knows what the others do not–what no human could. The ancient lore of his kind says that there is no more sacred bond than that between a wolf and a worthy master. Loyalty beyond reason, beyond hope, even beyond death, will be rewarded.

As he waits alone in the dark of the night, a light suddenly shines all around. It does not come from the distant moon, nor from any light made by man. The wolf watches warily as a bright beam shoots out from the stone itself. A vague form appears, though he cannot make out what it is just yet. Something is finally happening…are the promises of the ancient lore finally coming to pass? 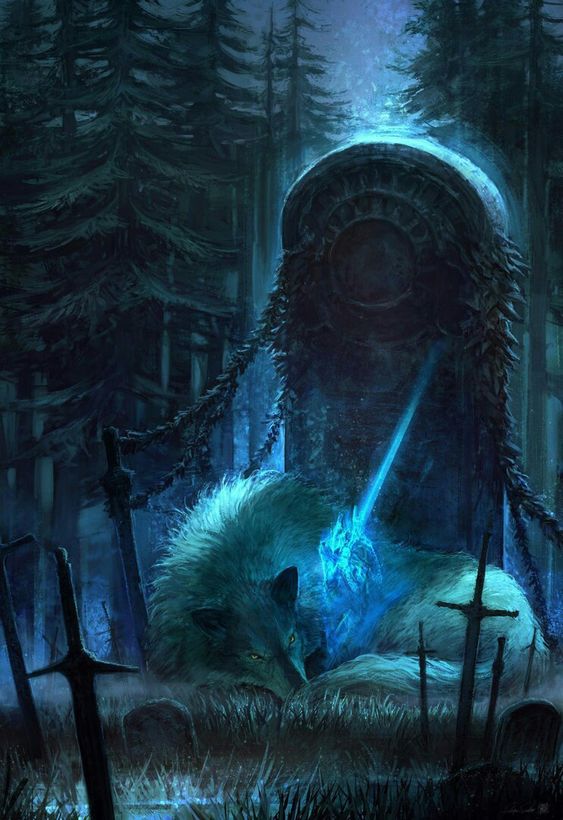